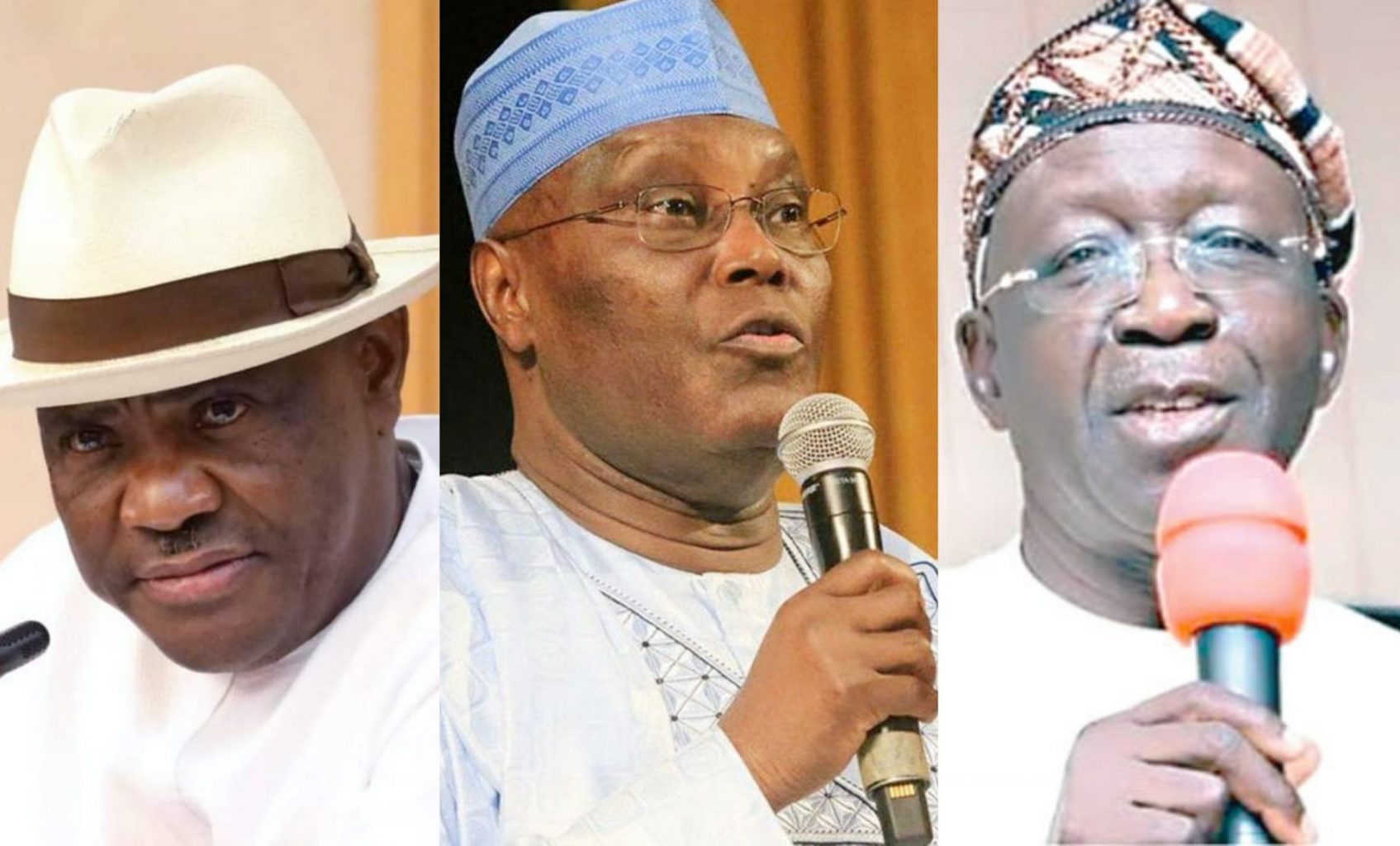 The continuous bickering within the People’s Democratic Party (PDP) appears to have taken a new twist after those in the camp of the Rivers State Governor, Nyesom Wike failed to align with the party’s Presidential candidate, Atiku Abubakar’s camp on issues bothering on the removal of Iyorcha Ayu as the National Chairman.

Like the emergence of former President Goodluck Jonathan in 2015 as PDP’s flag bearer, against the wish of some powerful northern forces in and out of the PDP, the emergence of Atiku Abubakar has also provoked agitations from some southern forces, splitting the opposition party into three factions.

Recall that last week, the Wike ally stormed out of the campaign Council of the party’s presidential candidate, insisting that Ayu must resign for them to rescind their decision.

They made their position known in a resolution read by former Deputy National Chairman of the party, Chief Bode George, after a long meeting held at Governor Wike’s private residence, near Port Harcourt a few days ago.

While accusing Ayu of compromising the May 28 and 29 presidential primaries of the party through his conduct, the members said the published presidential campaign council list was tantamount to putting the cart before the horse. They insisted that the party should do the right thing by calling on Ayu to resign.

“Senator Iyorchia Ayu must resign as the National Chairman of the party for an acting Chairman of the Southern Nigerian extraction to emerge and lead the party on the national campaign. Consequently, we resolve not to participate in the campaign council in whatever capacity until the resignation of Dr. Iyorchia Ayu,” George said, while announcing the resolution of the Wike group.

To make matters worse, the Rivers State Governor accused Ayu of being corrupt and also manipulated the party’s Presidential Primary. In a media chat with selected television stations a few days ago, Wike accused Ayu of accepting N1 billion as bribe from an unnamed presidential candidate within the party in order to influence proceedings ahead of the parties primaries in Abuja.

Wike stated that the call for Ayu’s resignation is not premised on the allegations of corruption and manipulation, instead Ayu is being asked to resign to fulfill the promise he made before the primaries.

“Ayu is very corrupt. Ayu has an opportunity to challenge me. Some of the governors can tell you. Will he deny the fact that he did not collect one billion naira in Lagos. He met one of the presidential candidates, and said he did not think the governors would sponsor the party. He collected the money and it is not in PDP account WIke alleges.

He continues: “If he denies it, I will call some of the business men who arranged the money in Lagos. We are not even challenging him on that. Nobody forced Ayu to make the pledge on resignation if a Northerner emerged; he knew this was the practice. Was it Wike that told him to make a pledge?

“Will he deny the fact that he didn’t collect N1bn from Lagos? He met one of the presidential aspirants towards that effect; let Ayu come out and deny and I will bring out the facts,” Wike revealed.

Meanwhile, Dino Melaye, spokesperson to the presidential candidate of the PDP flag-bearer Atiku Abubakar has described the Rivers State governor, Wike and others in his camp as “democratic autocrats” for their insistence that Ayu has to resign.

The former member of the National Assembly made the statement while fielding questions on the Arise TV Morning Show program.

“I want to start by saying that we don’t react to frivolities. We are not going to react to the statement he made out of anger. We are not going to respond to what he said. We are just focused on moving with our campaigns and satisfying the quest of Nigerians by building a new Nigeria where justice, equity, and egalitarianism will be the order of the day.

“We are not distracted, and we are not going to be distracted by responding to issues that do not even make common sense,” he said.

In another twist, the Benue Governor Samuel Ortom, a visible member of the Wike camp, has declared that he wants Ayu to remain as the party chairman.

Ortom stressed that he had confidence in Ayu’s ability to lead the PDP to victory in 2023.

“Governor Ortom vouched for the integrity and capacity of Dr Iyorchia Ayu to lead and rebuild the PDP to victory and rescue Nigeria from the misrule of the APC maladministration. That is why Ayu was returned unopposed by the northern caucus of the party and got elected as the national chairman of the PDP at the party’s convention”, says a statement issued by the Benue State Press Secretary. The governor had since come out to refute the statement, saying that he was still with Wike in his call for Ayu to resign.

Many had expected that the party would have resolved the infighting between the two political gladiators considering the various reconciliation attempts that have been made by the bigwigs to unite them.

There are also fears that the party’s failure to bring the crisis under control may affect their chances of winning the 2023 Presidential Election.

Whether the PDP will come out of its crisis in one piece is one thing, but its decision to jettison agitations to zone its presidential ticket to the South will remain the party’s nightmare. And that is why observers are wondering why it has become so difficult for party elders and leaders to come together and find amicable solutions to this lingering crisis.

Mistakes have been made, either consciously or unconsciously, by both parties in the crisis. It is only reasonable and expedient for the members to look at the bigger picture of coming together as a united force before the February elections. It’s yet to be seen if Wike and his gang will be placated with anything less than an Ayu resignation and the party leader, Atiku, is prevaricating by hiding behind the party’s constitution, when he can easily tell Ayu to give peace a chance and resign.

Series of meetings have been held, even a one on one between Atiku and Wike with no tangible result. Who will be the first to blink? And how does the party expect to win next year if this crisis is not settled?

As Nigerians await the outcome of Sunday’s meeting in Enugu by the Wike camp, one thing that is clear is that the party will have to find a solution between now and the end of October or they should all say goodbye to any sort of victory at the polls.

For now, all eyes will be on Atiku, who had long been seen as a master of the game and Wike, a rumbustious politician and the steps they are taking to either resolve or worsen the crisis.

It’s Atiku’s Turn, Yoruba People Should Not Be Selfish – Adebutu